The Global Gender Gap Report was published by the World Economic Forum in December 2018. This index measures the gap between men and women in four key areas: health, education, economy and politics. It doesn’t wish to establish priorities for each country, but simply to provide data and a clear method to identify shortcomings in each area. Countries can therefore establish their own priorities according to their economic, political and cultural environment. The 2018 report ranked 149 countries on a grade ranging from 0 (disparity) to 1 (parity). 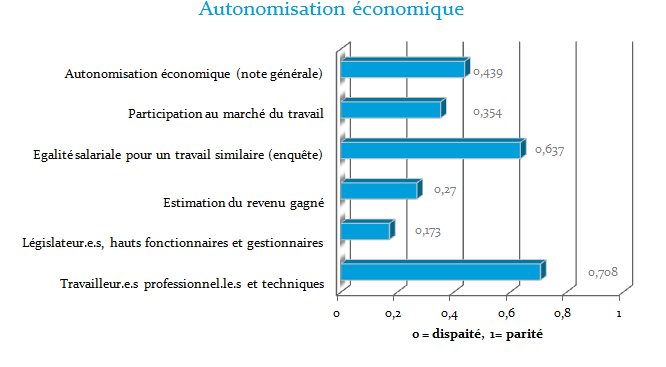 There are three worrisome indicators relating to economic empowerment. First of all, the indicator “Legislators, high officials and managers” analyses the ratio of women to men holding positions of responsibility. This indicator obtained a grade of 0,173 putting Tunisia in the 127th rank. In fact, only 14,8% of legislators, high officials and managers are women. In the workplace, women face major obstacles to take over such leadership roles. The lack of women in management positions both in the public and private sector is one of the major obstacles that must be overcome to achieve economic gender parity.

Next, the indicator estimating the income earned by men and women (in US$ and adjusted according to the purchasing power) obtained a grade of 0,270. Women earned on average a yearly income of 5 098US$, and men, 18 889US$. The gap is colossal. The results suggest that the economic power remains mostly in the hands of men. Men remain the main economic reference of the household and often retain control over their financial assets. This gap can be explained by two different phenomena. The most important one is the magnitude of unremunerated work in Tunisia. Women carry out most of the unpaid labor, such as domestic work, family care and child care. The second phenomenon is that there is a growing gap between women’s and men’s revenue. The report highlights the fact that there aren’t any laws imposing pay equity.

Tunisia obtained a grade of 0,216 thus ranking 55th in this sector. This grade slightly improved from 2006 when it was of 0,110. Three indicators analyze the gap between men and women in politics. 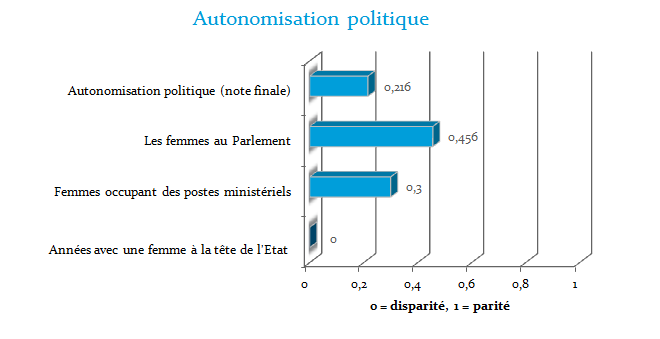 Even though Tunisia was near the global average on political empowerment of women (0,223), Tunisia remains far from parity. The first indicator “Women in Parliament” measures the percentage of seats in Parliament held by women. Results show the Tunisian Parliament is composed of 31,3% of women, and of 68,7% of men. The report highlights the fact that political parties have not adopted voluntary quotas to encourage women’s participation.

The second and third indicator measures the gap between men and women at the highest level of political decision-making. The indicator “Women Holding a Ministerial Position” measures the percentage of ministerial portfolios held by women. In Tunisia, only 21,3% of ministerial portfolios are held by women, while 76,9% of such portfolios are held by men. Finally, the third indicator estimates the total number of years (during the ultimate fifty years) which saw a woman be Head of State or Head of the elected government. Tunisia obtained a grade of 0,00 since no woman has ever been head of State. The last fifty years have only seen men hold this top political position.

Tunisia’s Place in the Region

Following the current trends, the global gender gap in the Middle East and the North of Africa will be closed in 153 years. The most complex gender disparities to solve are the economic and political empowerment of women that would respectively take 202 and 107 years to resolve.

With its 119th rank, Tunisia is the second-best country in the Middle Eastern and North of Africa region behind Israël (46th rank). Tunisia is followed by the United Arab Emirates (121th rank) and Koweït (126th rank) that hold the 3rd and 4th positions in the region.