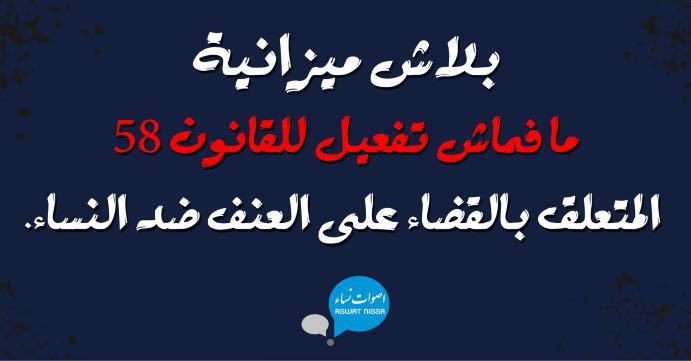 Aswat Nissa took part in the 16 days of international activism against violence committed against women. The 16 days of activism started on the 25th of November (on the International Day for the Elimination of Violence against Women) and ended on the 10th of December (on the Human Rights Day). These sixteen days of activism were a great opportunity to raise awareness on violence committed against women, and to act to eliminate such violence.

Violence committed against women, often ignored and trivialized, is a scourge of the Tunisian society. Numbers don’t lie: on average, 3000 complaints are made each month in police stations by assaulted women according to Imen Zahouni, general director of the Ministry of Women, Family and Childhood. This number would be much greater if it accounted for unreported acts of violence committed against women. The Tunisian government adopted in 2017 an Organic Law on the Elimination of Violence Committed Against Women. Even though this law recognizes physical, psychological, sexual, political and economic violence, questions remain unanswered about its application. For example, article 13 of this law states that women victim of violence benefit from public and community care, and immediate lodging. However, according to Imen Zahoun, only seven shelters for women victim of violence currently exist in Tunisia. Aswat Nissa therefore demands for the practical application of the law.

Firstly, in the short-term, Aswat Nissa calls upon the government to invest in the practical implementation of the law. Violence committed against women are of significant cost for the Tunisian economy and society. It has been proved that the costs of implementing the law would be inferior on the long-run than inaction. Acts of violence affect the daily life of women and can reduce their economic participation and productivity. Moreover, acts of violence committed against women are an important public health issue. Female victims of violence are more at risk of suffering from depression, from anxiety, and from an alcohol consumption problems, of contracting HIV, and of suffering from a miscarriage. It is also important to consider the sufferings caused to children and the negative impacts on future generations of such violence. An investment in the enforcement of this law would therefore have important economic impacts on the entire Tunisian society.

Secondly, Aswat Nissa aks the government to adopt a long-term approach sensitive to gender in its ministries. Seemingly gender-neutral, the budgets however have a different impact on women and men. Gender-sensitive budgeting allocates resources so as to answer the specific needs of women and men. A gender-sensitive budgeting initiative would highlight the underfinanced aspects of the Organic Law on the Elimination of Violence Committed Against Women. This tool is necessary for the implementation of the law since it directly affects twelve different ministries. By adopting this tool, decision-makers can use this information to lobby for a growth in funding for judge or police training, for accommodation centers, etc. Gender-sensitive budgeting would allow an efficient allocation of available budgetary resources and would allow the implementation of all the law’s provisions.